After quite a few years since their discovery, fullerenes are now a well-established subject of research in many areas of chemistry and materials science. Years of studies have made researchers aware of both potentials and limitations of this class of compounds. Fullerene science plays a noticeable role in fields, such as Nanotechnology, Supramolecular Chemistry and Materials Chemistry. One of the most promising territories of investigation includes the modification of the fullerene cage to improve and/ or enhance its qualities for various applicative purposes since fullerenes possess unusual magnetic, optical, photophysical, electrochemical, semiconducting and superconducting properties. A new research field has aroused based on the functionalization and study of new fullerene types in recent years, which intends to benefit from the properties of these carbon hollow clusters in different technological fields. The high number of functionalization probabilities combined with the rich supramolecular chemistry of fullerenes provides the production of multiple derivatives of fullerenes with a wide diversity of architectures and these are continuously discovered as novel materials.

C60 fullerene (also called as Buckminsterfullerene) is a type of fullerene with the formula C60. It has a cage-like fused-ring that reminds of a soccer ball, and it is made of twenty hexagons and twelve pentagons, with a carbon atom which has one π bond and two σ bonds at each corner of the shape to create a universal vertex.

Figure 1: Stereographic projection of C60 fullerene[1]. (Note: To visualize the 3D image, the picture must be held about 15 cm from the eyes and the eyes must focus at infinity). 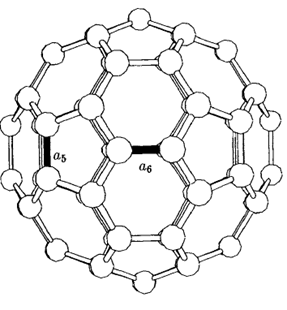 In the 1980s gas-phase studies, in which clusters and molecular species were produced by laser vaporization of a graphite target, mass spectroscopy was used as the main characterization tool for fullerenes. As might be expected, C60 fullerene was discovered in 1985 by Robert Curl, Harold Kroto, and Richard Smalley using laser evaporation of graphite. Hence, the closed cage nearly sphere shaped C60 fullerene have attracted a great interest in last decades due to its unique structure and properties.

Theoretically every material exhibits wave-particle ductility behavior, however the buckminsterfullerene (C60 fullerene) is the largest material that is observed to exhibit this behavior. The appearance of fullerenes differs according to the thickness of the material, whether or not they are in solution, and the nature of the solvent. Very thin films of C60 fullerene are mustard yellow, the color becoming brown, and finally black as the film thickness increases. Solutions of C60 fullerene have a beautiful magenta color in hydrocarbon solvents, but appear brown in some pi-donor solvents, due to probably some charge-transfer interactions. 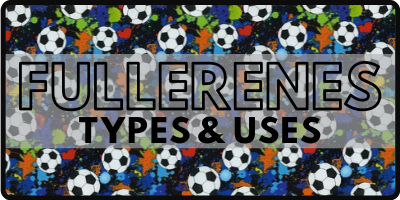 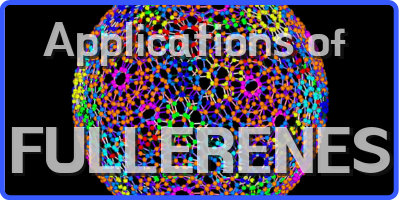 Accurate determination of solubilities is difficult, partly because saturated solutions are dark and opaque, hence it is not easy to see if all the solid fullerene has dissolved. Also, a curious feature is that the solubility passes through a maximum with increasing temperature. However, there is some evidence that the behavior of C60 fullerene in this respect depends upon whether or not the sample has been baked free of solvent prior to carrying out the temperature/ solubility measurements. This aspect is still under investigation, but it seems possible for example, that clustering (there is evidence that this exists in solution), may differ appreciably for baked- and unbaked samples. The close packing in baked samples could cause clusters to be solvated as such, the clusters then gradually breaking up as the temperature of the solution is raised. The solubilities of C60 fullerene have been determined in studies and the results have been discussed over the years. It has been concluded that it is evident that there is no solvent parameter which universally explains the solubility of C60 fullerene. There does seem to be an increase in solubility with increase in solvent molecular size, but any correlation with electron-donating abilities of the solvent is lacking.

C60 fullerene is a potent producer of singlet oxygen and therefore precautions should be taken to avoid contact with the skin. However, in this connection it should be noted that whilst a water-soluble fullerene carboxylic acid showed biological activity-toxicity and G-selective DNA cleaving ability (but only under the action of low-level visible light) and that fullerenes are potentially excellent photoinduced electron-transport moieties C60 fullerene has been found not to affect the proliferation of human keratinocytes or human fibroblasts indicating that its accumulation in human cells does not result in acute toxicity. Also, under visible or UV irradiation in the presence of molecular oxygen, alkenes and dienes undergo reaction with singlet oxygen if a trace of fullerene is present to give photo-oxygenation products. There is however a disagreement as to the relative effectiveness of the fullerene, some surveys find the former to be the more efficient catalyst, whilst others find it to be the latter. Because C60 fullerene has a low-lying LUMO, it is readily reduced and can acquire, reversibly, up to six electrons under electrochemical conditions. The potentials at which the electrons are added depends on the extent to which the solvent either donates electrons to the cage or accepts them from it. Therefore, C60 fullerene has good oxidizing properties and may oxidize readily the other materials in which it is contact.

Some useful data for C60 fullerene are the following:

Three methods are commonly used to make C60 fullerenes. These are:

(i) The Hufmann–Kratschmer procedure involving arc-discharge between

graphite rods in an atmosphere of helium.

(ii) Combustion of benzene in a deficiency of oxygen.

Hufmann-Kratschmer method has been the most important method for fullerene production, and its introduction marked the real beginning of fullerene science. It is the preferred method because the only by-product is graphite, which if necessary, can be reformed into rods and recycled. The Hufmann–Kratschmer method involves arc-discharge between high-purity carbons rods of 6 mm diameter in an atmosphere of 100–200 torr helium. Argon may also be used but is less effective. The temperature required for fullerene formation is 2000 ℃, and obviously a small gap between the rods is necessary to prevent a fall in temperature. The need for this gap was shown at an early stage and was confirmed subsequently. The yield of fullerenes in the soot produced is approximately 5% and is higher when taken from the reactor at greater distances from the arc source, which implies that the initially formed fullerenes are subsequently degraded by UV irradiation. Numerous ingenious variations in reactor design were introduced at an early stage, including, for example, a carousel and one with an autoloading device. The latter method, designed by Bezmelnitsyn and Eletskii is especially notable, using carbon strips cut from a reactor moderator block. A stack of 24 of these (anode) are housed in a water-cooled chamber equipped with a hinged door fitted with an O-ring seal. The cathode consists of slowly rotating a carbon wheel which passes a scraper to remove accumulated slag. The strips are gravity fed and the lowest strip is slowly wheel-driven into the cathode. When consumed it drops away exposing the next strip, and the process continues during 24 hours to yield 100–200 g of fullerene-containing soot, accessed by opening the end door of the reactor.

Figure 3: Schematic depiction of an autoloading version of an arc-discharge apparatus

Scientists have discovered that combustion of benzene in a deficiency of oxygen resulted in the formation of C60 fullerenes. This continuous method has been developed to the extent that a purpose-built factory has been erected in Japan, capable of producing 5000 ton of fullerenes per year, but currently running at about one-tenth of that capacity. Hence, one envisages that this investment must be driven by the expectation or knowledge that large-scale applications of fullerene lie ahead.

Condensation of Polycyclic Aromatic Hydrocarbons through Pyrolytic Dehydrogenation or Dehydrohalogenation

These methods produce fullerenes but not in sufficient quantities for practical applications. Rather, they provide a means of deducing the mechanisms of fullerene synthesis. For example, C60 consists of six dehydronaphthalene moieties located at the octahedral sites, and pyrolysis of naphthalene does indeed produce C60,7 as does corannulene, (which has been detected as a precursor in the combustion process), 7,10-bis(2,20 dibromovinyl)fluoranthene, and 11,12- benzofluoranthene. The dehydrogenation involved is a high-energy process and dehydrohalogenation of precursors is more successful, a feature made use of in formation of C60 from a chloroaromatic precursor. No other fullerene has yet been made in this way.

Although research on solid C60 fullerene is still at an early stage, these materials are already beginning to show many exceptional properties, some of which may lead to practical applications. Small-scale applications will come first; then targeted applications utilizing the special properties of fullerenes are expected to follow.